The Great Retirement Exodus: What Is Really Happening and Why

Who would have imagined a teeny tiny virus would completely change everyone’s life?

One of the outcomes appears to be an acceleration in the number of people retiring. In fact, a new term has been coined to describe this growing trend.

"The Great Retirement" is an unprecedented flood of older adults retiring earlier than otherwise planned. Triggered by the pandemic, Baby Boomers are leaving the workforce in droves. Reasons include a desire to enjoy life, health concerns, changing work environment and improved financial stability.

To understand what's really happening, we need to look at the numbers and peel back the reasons why so many are retiring.

What Is the Great Retirement?

This unprecedented trend was referred to as “a silver tsunami of Baby Boomers leaving the workforce” in a recent article by Forbes. Everything was triggered by the onslaught of a world-wide pandemic.

By the spring of 2020, COVID-19 was like a wildfire, sweeping across the United States. Long-term care facilities were decimated, hospitals overrun and many businesses shuttered.

By the fall, according to the PEW Research Center, nearly 30 million (28.6) Baby Boomers had left the labor market and retired. This was an increase of 3.2 million or 213% over the previous year!

In almost every respect, this has become the perfect storm as more and more Baby Boomers contemplate retirement. This YouTube from PBS News Hour discusses this topic with some early retirees.

I don’t believe this is a one-time event as the number of new retirees has more than doubled in the first quarter of 2021. If this trend continues, there could be exponential growth with a more than doubling of the amount of people leaving the workforce. 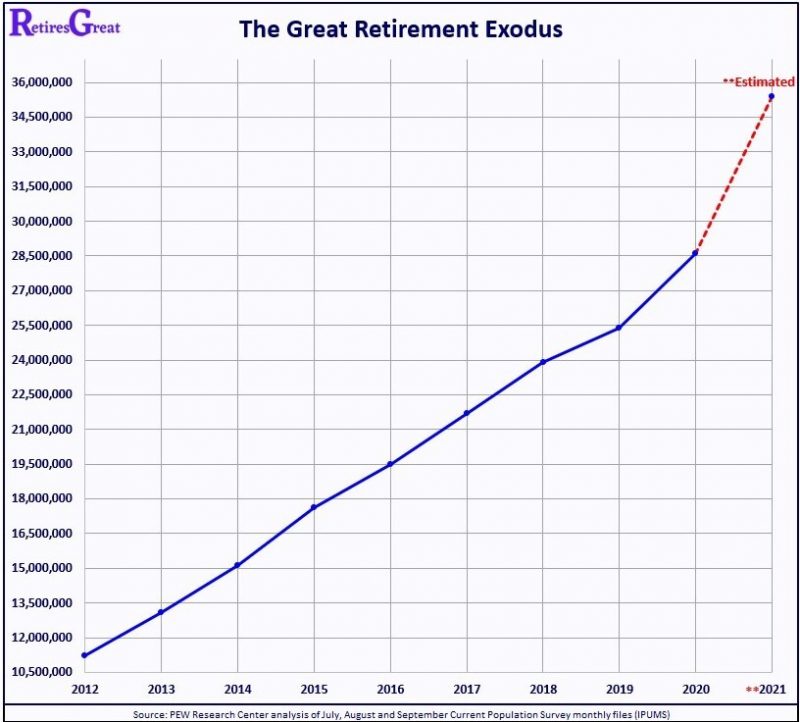 Statistically, around 10,000 Americans turn 65 every day. An estimated 42.3 million workers are between the ages of 55 and 64, making up about 20% of the labor market. This adds up to a heck of a lot of people contemplating when to retire.

A survey by Coventry Direct identified 75% of the respondents said they plan to retire sooner than later. Living modestly appears to be more attractive than working to the full retirement age.

Not surprising, when you take into consideration the upheaval we’ve all lived through over the past couple of years.

There's no doubt the past couple of years have been filled with anxiety. The majority of people have re-evaluated their priorities and what’s important to them. The stark reality is none of us are getting any younger.

What’s the point of working a few more years when you consider what you might be missing out on? Examples could include:

One of the most commonly expressed sentiments is to be healthy enough to enjoy retirement.

If nothing else, the pandemic has made each of us more aware of our mortality and how precious time is. This was driven home with over 800,000 American deaths and millions more suffering long-term effects.

Two of the greatest factors for vulnerability are age and any pre-existing conditions. Shockingly, according to the CDC, six in ten adult Americans live with at least one chronic disease!

As if all this wasn’t bad enough, getting older makes us even more susceptible to declining health. Statistics from the CDC report:

By the time we’re 65, the likelihood of having, at least, one chronic condition increases to 85.6%. Understandably, more and more Baby Boomers are questioning if they should try to squeeze in a few more years of work.

With all the attention on COVID, basic healthcare services have also been limited. This has led to fewer checkups which can lead to undiagnosed conditions. On top of everything else, non-critical treatments and surgeries were postponed.

In other situations, a family member might need some additional assistance. This could be an aging parent, spouse or other loved one when it’s no longer viable for them to manage things on their own.

It might not be feasible to hold down a full-time job while still providing help. When health begins to decline, it tends to refocus what's really important in life.

An estimated 85% of people, either, dislike or find their jobs unfulfilling. The stresses over the past two years have further exacerbated this situation.

At the heart of the matter, they’re opting for an earlier retirement to be happier and do the things they want.

The most common age to retire is 62 as identified in our post what age to retire. This, also, happens to coincide with the earliest of Social Security eligibility. This may be changing as more folks opt to retire at even younger ages.

Job Dissatisfaction and Lack of Recognition

Job dissatisfaction might be the #1 underlying factor for the great retirement exodus. Forty hours a week at an unfulfilling job can feel like an eternal punishment. After a lifetime of drudgery in an unfulfilling job, who isn’t ready to call it quits?

Especially when management consistently down plays and fails to recognize the contributions of their seasoned employees.

For years, companies have been slashing costs and marginalizing older workers. It’s almost like your age has turned you from a valued asset into a liability.

Some of the signs of job dissatisfaction include:

For those working under these conditions, it’s not surprising they dream of the day of leaving it all behind.

Never before in history have so many organizations been forced into massive change. Some industries, such as airlines, hospitality and tourism were completely devastated.

Everyone else needed to adapt and dramatically change how business was conducted.

All the new health protocols and structural changes such as plexiglass dividers and social distancing. In spite of all this, infections continued to soar. Going into work became life threatening, especially for high-risk groups.

For those who had the ability to work from home, this could be almost as stressful. Very few companies were prepared for remote working and the new technologies, such as video conferencing, seldom went smoothly.

On the positive side, some loved the flexibility of working from home. No more daily commute saving both time and money. For many businesses, this also paved the way to reduce expensive office space and real estate costs.

But not everyone enjoyed the experience of being cooped up at home. They missed the camaraderie with their work colleagues and a more structured office atmosphere.

In addition, maintaining a team approach seems to have waned and many organizations indicate they need their employees back in the office.

Ironically, it appears those who loved working from home are being forced back into the office. Whereas those who want to go back, are expected to continue working remotely. Neither situation is conducive to job satisfaction.

For decades, corporate America has downsized and cut costs in the quest for bottom line profits. Older workers typically cost them more both in their wages, paid time off and other benefits.

Furthermore, common misperceptions are older individuals aren’t as tech savvy or able to adapt. This was driven home in the early days of the pandemic with 5.7 million workers 55 and older losing their jobs.

According to Market Watch, 78% of people saw or experienced workplace age discrimination in 2020. This translated into a 17% greater chance of being let go than their younger colleagues.

The collective mindset appears to be after a certain age, employees become more of a liability than an asset.  This is reinforced with limited career advancement opportunities or promotions.

Salary increases are often capped and incentive packages to leave may be offered.

Obviously, all this is discriminatory and the “writing is on the wall” for these individuals. Effectively, they have a target on their back.

In spite of a world-wide pandemic, Americans are saving more than ever before. In fact, according to Statista, personal saving rates increased to 13.7% by the end of 2020.

Certainly not all doom and gloom with many preparing for retirement. This trend can be partially explained by several factors:

Combined, these factors have made retirement more financially feasible than otherwise anticipated.

Initially, I questioned if this was just a one-time event or if a mass exodus had just begun. Based on the evidence and how our world has changed, I suspect this is only the tip of the iceberg.

In fact, as the numbers come in, there are indications of exponential growth and a continued doubling of people retiring in 2021 and beyond. The true impact of the pandemic may never be fully determined.

Lives have been lost, small business decimated and a national debt increasing by trillions of dollars. Everything has changed, not necessarily for the better, and the workplace is vastly different.

Unlike previous generations, Baby Boomers tend to view work as a means to an end. They don’t live to work. In general, we have a zest for life and want to make the most of it.

After all we’ve been through, many are questioning if working a few more years is worth it.