12 of the Best Card Games for Older Adults 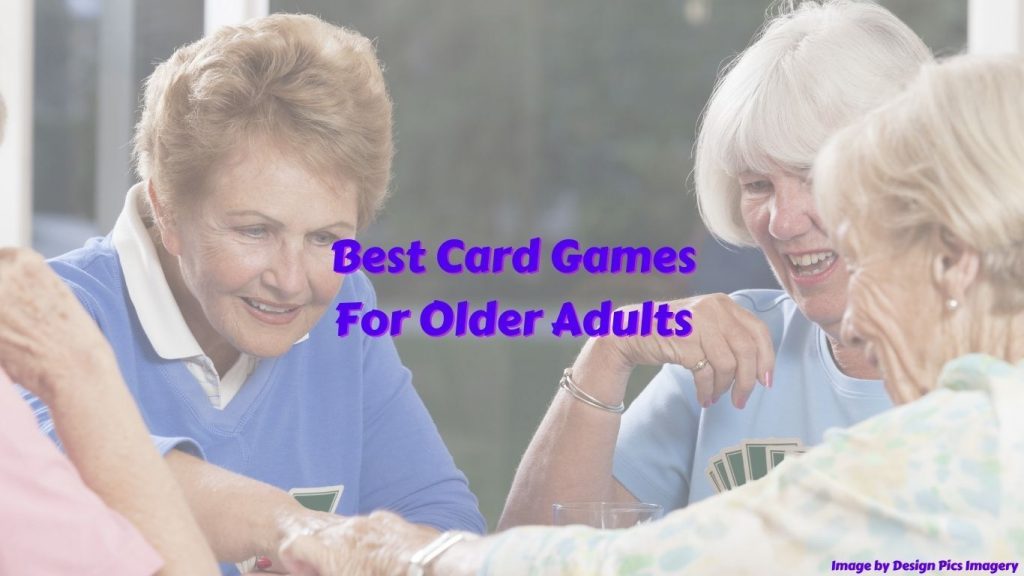 Getting together to play cards is a timeless tradition filled with fun and laughter. In addition to the social aspects, there are numerous benefits associated with it. I set out to determine the top card games and why they're so popular with seniors.

The best card games for older adults depends upon the individual and what they enjoy most. The more challenging games are perfect for some, whereas others prefer simpler, easier to play games. The social aspect can also be important.

Playing cards dates back to the Middle Ages, first appearing amongst the European nobility.

At a rough estimate, there could be as many as 10,000 different card games! Yet, in our modern age, there are decidedly certain favorites which most of us are familiar with.

A fun evening might be getting together with another couple for a few hands of cards. Choose a game they’re comfortable with and the evening flies by.

This is also a great way to share quality time with an elderly loved one. Our article, Fun Things to Do with Elderly Parents, shares additional ideas.

Playing cards with family or friends really is a social event. While often considered only an entertaining pastime, there are numerous additional benefits associated with it.

Benefits of Card Playing for Seniors

Besides being a fun way to pass the time, looking forward to a rousing game may very well be the highpoint of the day or week. In addition, there are numerous health benefits associated with playing cards such as:

While this might sound obvious, the best card games for older adults are usually the ones they’re most comfortable with. When it comes elderly seniors, this could be a game they haven’t played in years.

Also be aware of potential limitations such as failing eyesight or arthritic hands. This is when oversized and large print cards can be helpful. Check out our Amazon affiliate link, Large print playing cards, for options.

I’ve compiled some of the all-time most popular card games starting with the most challenging games to play.

Bridge is one of those timeless card games generally considered the most difficult to learn and play well. Serious enthusiasts compete in tournaments across the country. At this level of play, teams are highly committed to winning.

That’s not to say it isn’t fun to play with family and friends. The rules are more complicated and greater concentration is required to play effectively. The objective is to defeat the opposing team by outplaying them.

Played with a standard 52 card deck, each player is dealt 13 cards.

While there's an element of chance in the cards you receive, this really is a game of skill and partnership. Proficient players pay attention to each card played and what remains in the deck.

Studies have proven that regular bridge playing sharpens the mind and improves memory retention. Not only fun, bridge can also become downright competitive!

This is a good YouTube video on How to Play Bridge.

Check out our Amazon affiliate link for Bridge sets (cards and scorepads).

Cribbage has been described as an unusual game with some quirky rules. Invented in England back in the 1600’s, it has stood the test of time and remains popular to this day. Never more so than with the older generation.

What makes it unique is combining the almost perfect blend of luck and skill. A novice can beat a skilled player by drawing the right cards. Yet, with similar cards, experience generally becomes the deciding factor.

On the surface, it might seem to be a game of chance. However, evaluating the value of your hand and selecting cards for the crib is critical. The entire card play comes down to assessing probabilities and outguessing your opponent.

Crib is ideal for two, unlike most card games where “the more, the merrier”. Also unique is the use of a board to keep track of the score. This becomes a visual race to see who can get to 121 points first.

Here’s a good YouTube video on How to Play Crib.

Check out our Amazon affiliate link for Crib boards.

Another one of the best card games for older adults is rummy.

Fast-paced and fun with relatively simple rules makes it a contender for the most popular card game in existence. As luck plays a bigger role than in Bridge, the experience tends to be more light-hearted and sociable.

This is a game of both luck and skill perfect for two to six people. The objective is to create melds and lay down your entire hand. To accomplish this, each player, in turn, draws from the discard pile or a new card from the deck.

The number of cards dealt depends on how many are playing. When playing with 2 people 10 cards are given, 3-4 people it’s 7 and 5-6 receive 6.

To get started and keep everything organized, check out our affiliate link for a rummy game with two deck card trays.

This is a good YouTube video on How to Play Rummy.

Canasta was one of the most popular games back in the 50s and today, a favorite of many seniors. Combining elements of both Bridge and Rummy, Canasta also sharpens the mind. With two decks of cards used, it also enhances fine motor skills.

The goal is getting the most points by melding cards and making canastas. With four players, strategy is involved as you and your partner compete against the other team. When there are only two or three players, it becomes individual play.

This is a good YouTube video on How to Play Canasta. Check out our Amazon affiliate link for Canasta playing cards, trays and scorepads.

Euchre is another game which is most fun when played by four people in teams of two. Relatively easy to learn with the goal of winning the most tricks.

Originating in Alsace under the name “Juckerspiel”, it was introduced in North America in the early 19th century. To this day, it remains popular in the American Midwest, especially Michigan.

This particular game is somewhat different as it only uses 24 cards – the aces through the nines. The top card of the deck is flipped over and becomes the trump card. Except not always! This is a quick moving game filled with strategy

Here’s an instructional YouTube video on How to Play Euchre.

Check out our Amazon affiliate link for Euchre playing cards.

Pinochle is another popular game with many seniors. First introduced by German immigrants, it has several similarities with Euchre:

The rules for Pinochle are a little more complicated and especially in how the points are scored. These are awarded based on the number of melds and point values of card combinations.

This is an instructional YouTube video on How to Play Pinochle.

Check out our Amazon affiliate link for Pinochle cards, card holders and scorepads.

Widely recognized as one of the most popular card games of all time! More often than not, it’s associated with casinos or other high stakes gambling establishments. The truth of the matter, poker is widely played and, many times, just for fun.

My husband regaled me with tales of “poker night” with his parents and grandparents. As a young boy, he’d break out his piggy bank and shake loose twenty-five pennies. Needless to say, playing with the grown-ups was a big deal.

Traditionally, poker can be thought of as an ideal game for up to six or seven players. When playing amongst family and friends, it’s common to take turns dealing. This way everyone has a chance to play their favorite poker game.

Another option is online gambling with almost every imaginable game. Our article, Best Online Games for Older Adults, explores the most popular games available.

Blackjack is an easy, exciting game involving strategy and playing the odds. The object of the game is to beat the dealer by getting your cards to add up to 21 (or as close as possible) without going over.

Initially, you’re dealt 2 cards. Then it’s up to you to decide how many additional ones you want to get you to that magic number.

It’s another game that involves some betting. Items to use could be match sticks, poker chips, pennies or whatever you choose to be the token. The competition could heat up with a rousing rivalry developing adding some spice to the game.

You can play blackjack with as few as 2 up to however many want to participate.

This is another variation of a poker like game which is easy to understand and play. It's a fun game with family and / or friends. The optimal number is 5 or 6 people squeezed around the table.

Each person is dealt 3 cards. The goal of the game is to have your cards add up to 31 in one suit, or as close as possible. This is accomplished through discard and pick up each time it’s your turn.

Each person starts out with three tokens represented by a marker such as a poker chip, penny or dime. The lowest hand at the end of the round loses one token. Once you’ve lost all three, you’re out of the game.

This game brings up fond memories for me! When visiting my uncle and cousins, we’d gather around the table and make an evening of it. Downright good times as we did our darndest to outsmart and out bluff each other. It's my favorite game!!

Here’s an instructional YouTube video on How to Play 31.

Crazy eights is another one of those best card games for older adults.

It’s fun, simple and the social interaction with a bit of friendly rivalry makes this an all time favorite. This can be played with 2 to 7 players; although two decks will be needed for more than five players.

The objective of the game is being the first to run out of cards. As the name implies, the eights are crazy! After playing one, you can change the suit totally messing up the following player.

By paying attention to the suits others play, strategic thinking and memory skills are enhanced.

Go fish harkens back to our childhood. Easy to play with a goal of getting the most four of a kind. Its very simplicity makes it easier for those who struggle with more complicated games and rules.

Some of the benefits include exercising matching skills and remembering the cards other are asking for. The social aspect and fun nature of the game makes it a hit for many aging seniors.

This is an instructional YouTube video on How to Play Go Fish.

Solitaire, as the name implies, is usually played alone. In its most basic form, the objective is to rearrange a standard deck into four suits in ascending order. For variety and greater challenge, as many as 150 variations have been designed.

Several of the more popular versions include Klondike, Spider, Pyramid, Baker’s Dozen, Free Cell and Forty Thieves. In addition, most of these can be played online.

One of the greatest benefits of playing Solitaire is releasing tension while soothing the mind. Instead of feeling bored or fretting over things beyond your control, Solitaire helps refocus the mind.

Other advantages of playing include:

This is an instructional YouTube video on How to Play Solitaire.

There’s a wide variety of card games suitable for almost every level and interest. During our busy working years, most of us had precious little free time. After retiring, playing cards can be both fun and beneficial.

Without a doubt, it’s a great way to spend time with family and friends. Not only does it provide a reason to get together, everyone has a great time. Additionally, it stimulates your mind, improves memory and tunes fine motor skills.