Are Alaska Cruises Good for Older Adults or Is There a Better Option? 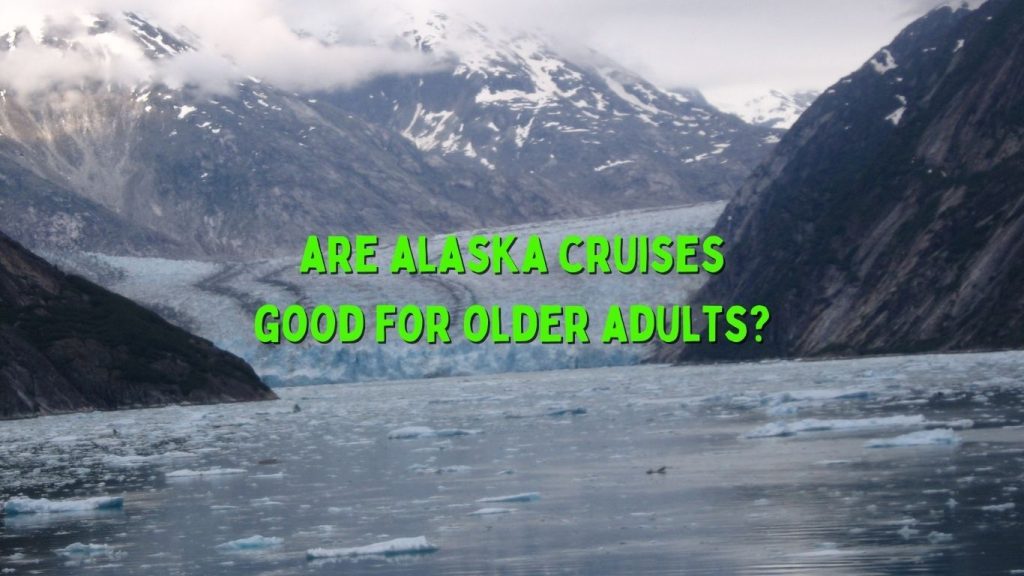 Who hasn’t thought about one day seeing Alaska?

The 49th state ranks high with its awe-inspiring beauty and untamed wilderness. Even if you’ve never taken a cruise before, you might be wondering if this is the best way to visit this magnificent state.

Not only are Alaska cruises good for older adults, over half of all visitors (58%) prefer this option. Traveling by sea is a more relaxing way to experience the breathtaking natural beauty. And it’s often the most cost-effective means of seeing the state.

My mother and father often talked about, one day, seeing Alaska. Alas, after my father’s passing, their dream was never to be. The most wonderful Christmas gift I ever gave my mother was taking her on a week-long Alaska cruise.

The excitement increased as the time grew closer. We carefully planned our adventures to ensure we didn’t miss anything important. This was the trip of a lifetime and I’ll never regret a moment we shared.

What Is the Best Option to See Alaska?

A cruise ship is the best option to see Alaska as you’ll visit coastal towns and cities such as Ketchikan, Juneau and Skagway. From the comfort of your ship, you’ll experience the stunning pristine beauty of Alaska and all its wildlife.

Options to visit Alaska include traveling by land, sea or air. According to the Alaska Tourism Agency, over half of all visitors arrive by cruise ship.

There’s nothing quite as spectacular as gliding past snow-capped mountain peaks, icy glaciers and through majestic fjords. The best part is sitting back and relaxing while taking in an ever-changing kaleidoscope of nature.

Binoculars are handy for the wildlife teeming all about. Seals, sea lions and whales are frequently seen swimming about. On the shoreline, you might spot a bear with cubs or a moose on the loose.

Each day brings a new port and opportunity to go ashore. They're launching points for amazing excursions or just exploring the town on your own. There’s always something interesting to see and do.

Back on board, everything’s taken care of including dining, entertainment and a comfy cabin complete with a turned down bed. What makes Alaska cruises good for older adults are all these great amenities and features.

For many vacation destinations, booking a flight and accommodation is a cost-effective option.

However, Alaska is expensive. Between the airfare and hotel charges, it appears to cost as much as a cruise. And, that doesn’t include traveling to other locations, meals or entertainment and you’ll probably see less.

You’re basically stuck in one place. For example, from Juneau you’d either need to book another flight or a ferry to see either Ketchikan or Skagway.

While the highway route is quite an adventure, it's an extremely long road trip.

Total driving time is about twenty-five hours. Mile zero is at Dawson Creek and then 1,387 miles (2,237 kilometers) to Delta Junction, the end point. And, then another twenty-five on the return drive.

Dawson Creek is located in northern British Columbia, Canada. Anywhere from the U.S. will add more hours behind the wheel. For instance, it’s 805 miles (1,296 kilometers) from Seattle taking about fifteen hours.

With the rising cost of fuel and number of days on the road, this option isn’t practical for many folks. Other factors consider include:

Putting this into perspective, taking a cruise will likely cost less and be more enjoyable.

What Are the Most Popular Alaska Cruises?

The overwhelming majority of Alaska cruises good for older adults are seven days leaving and returning to Seattle or Vancouver. These are referred to as the inside passage and typically visit Ketchikan, Juneau, Skagway and Victoria.

Below shows sample itineraries for the major cruise lines leaving from Seattle: 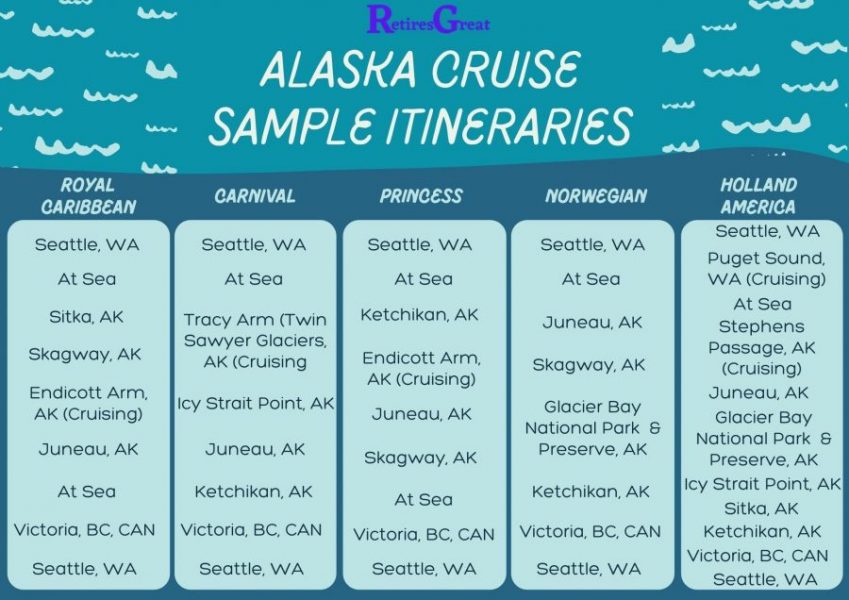 These one-week itineraries are all similar and a great experience for first-time visitors. There are, also, more comprehensive options with extended durations or a land-based segment.

The Best Things to See and Do on An Alaskan Cruise

An Alaskan cruise is completely different than your typical sun drenched Caribbean one. It's more like going back in time and immersing yourself in the unspoiled beauty of this wild northern land.

For the majority of travelers, seeing a glacier up close is an expectation. The cruise lines don’t disappoint and a whole day is usually allocated for exactly this purpose. I found it fascinating as the captain threaded his way through all the ice floes.

He got us as close as was deemed safe. Seeing a glacier from the water provides a whole new perspective. Some of the ice is thousands of years old, frozen in time. Yet, incredibly unstable with large chucks breaking free and “calving”.

During the ice age, glaciers covered much of North America. Most sobering is the realization they’re receding at an alarming rate. And, climate change is further exacerbating the process.

Ketchikan is at the southernmost tip of the inside passage and is commonly referred to as the “Salmon Capital of the World”. It has the best salmon fishing in the world and every enthusiast should consider chartering a boat for the day.

Alternatively, one could spend the day exploring the waterfront and downtown area. Renown for its rich native culture, over 80 North American totem poles can be seen throughout town. In addition, there are many interesting shops and businesses.

Another popular attraction is the Misty Fjords monument. Carved out by retreating glaciers, this is a magnificent network of fjords and steep cliffs. Located forty miles to the south, it's best seen by boat or float plane.

Bordered by mountains and surrounded by water, Juneau has no road access to the outside world.

Yet, it’s the state capital and one of the oldest cities in Alaska. An interesting fact, Juneau is famous for its bald eagles with an estimated 15,000 to 30,000 living within the region.

A stroll through the historical downtown is like walking back in time. The streets are a maze with buildings from a different era. These include Victorian homes, quaint shops, Klondike era saloons and hotels.

The most popular attraction is Mendenhall Glacier receiving around 500,000 visitors a year. Located twelve miles to the north, it can be visited by booking a tour, taxi or even public bus.

Juneau might be one of the best spots in the world for whale watching. A whale watching tour guarantees spotting a wide variety of sea going mammals.

If you’re lucky, you might even be close enough to watch a pod of humpback whales bubble-ring feeding.

Further north lies Skagway, the gateway of the Klondike gold rush. Considered the last grand adventure of the 19th century, gold seekers from all over the world flocked here seeking riches.

At its peak, the boomtown population was around 10,000 inhabitants. The completion of the White Pass and Yukon Railroad in 1898, eliminated the daunting climb facing would-be prospectors.

However, by the following year; the gold rush was all but over. Surprisingly, the train has remained in service to this day.

In many respects, it’s an engineering marvel, climbing 3,000 feet over and around almost impossible mountain obstacles. This narrow-gauge railway is a one-of-a-kind experience and highly recommended.

Meanwhile, the well-preserved downtown is worth seeing. Explore on your own or take a walking tour. The Klondike Gold Rush Visitor Center and Museum includes exhibits and presentations.

The city of Victoria (British Columbia, Canada) is one of the oldest Pacific Northwest settlements. Founded by the Hudson's Bay Company in 1843, it grew to become the capital of the province.

The picturesque inner harbor and promenade fronting the Fairmont Empress Hotel and Parliament Buildings is deemed as one of the most beautiful in the world.

A wonderful way to spend an afternoon with a plethora of interesting merchants, street performers and artists.

Another popular attraction is the world famous Butchart Gardens. Back at the turn of the century, this was a mined-out limestone quarry. Jennie Butchart decided to create some natural beauty out of the remains of this barren land.

Today it’s a lush 55-acre property attracting over a million visitors a year.

With an almost perfect growing climate, the gardens have flourished with over 900 varieties of plants. These consist of five main gardens complete with trickling streams and fountains.

The Best Months for An Alaska Cruise

The best months for Alaska cruises are generally in May or September. Besides being quieter with less crowds, there are many attractive discounts. In addition, while the spring is vibrant with new beginnings the fall is spectacular.

The Alaska cruise season extends between May and September.

One might expect late June or July to be the best months to travel when it’s warmest and has the longest hours of daylight. However, it's also the peak season when everything becomes more expensive and busier.

This far north, the change of seasons is dramatic! After a long frigid winter, the land shrugs off its mantle of white and the days grow longer and warmer. May is an amazing month to visit as the land reawakens and blooms.

Equally astounding is the transformation to golden fall colors in September. The days are rapidly getting shorter and the night sky begins illuminating. The best time to see the Northern Lights are from September through April.

Just How Much Colder Is Alaska in May or September?

While July is the warmest month, don’t expect sweltering temperatures or lounging by the pool. Even on a sunny day, it seldom reaches more than the mid 60’s.

On an overcast day, the breeze coming off a glacier can make it downright bone chilling.

As I recall, my first purchase was a parka when we arrived in Ketchikan. That was in late June! My thought is if you need to bundle up anyways, does a few degrees make much of difference? As you can see, the average highs and lows in May and September are several degrees cooler than in July. This means dressing accordingly, particularly for early mornings and evenings.

Another aspect is the almost 18 hours of daylight. While a novelty at first, it can also mess up getting a decent night’s sleep.

How Much Cheaper Is May or September?

You might be able to save as much as 30% by traveling in May or September.

When demand is lower, cruise lines generally offer incentives to fill cabins. This could be a reduced rate, free upgrade or inclusion of other offerings such as a beverage plan, specialty dining or ship board credits.

If you’re new to cruising, you might be interested in our article, Are Cruises Worth It. It goes into more detail on what’s included and some of the hidden costs.

Another added benefit of traveling during the shoulder season is there’ll be less crowds.

Seldom will there be long line ups or sold-out tours. Sometimes, the rates are even reduced. By the time the school year ends in late June, everything starts getting busier.

Closing Thoughts on Are Alaska Cruises Good for Older Adults?

Almost everyone has thought about one day visiting Alaska. There’s a big difference between wishful thinking and actually deciding to do something. If the 49th state is on your bucket list, I assure you it’s worth seeing.

There are numerous travel options and my belief is cruises provide the greatest value. Not only will you see more, the total cost will likely be less. In addition, traveling by sea is more relaxing and enjoyable.

Finally, consider going in May or September to avoid the peak season. You’ll likely find it more interesting, save money and minimize crowds.