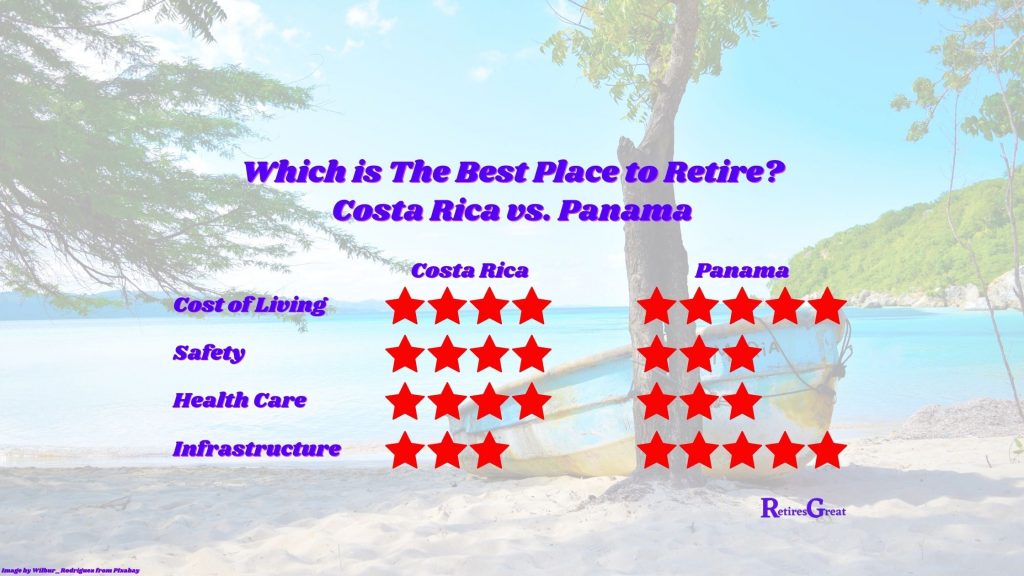 While both Costa Rica and Panama are popular destinations for retirees, we wanted to determine which one is better. Both are tropical paradises with mild weather, lower cost of living and miles of sandy beaches. But which one is perfect for you?

Panama edges out Costa Rica as the best place to retire in 2022. This is primarily due to a lower cost of living, reduced import taxes and overall better infrastructure. Still, both countries are great retirement destinations.

There are many global options to retire abroad and Central America remains the most popular.

Reasons To Retire in Central America

Before delving into the differences, let’s discuss why these Central American countries are good retirement destinations.

Everyone has their own opinion on which is the better retirement country. Consistently, Costa Rica and Panama are identified as the most desirable retirement destinations.

According to International Living Global Retirement Index, the best place to retire abroad is Panama. Costa Rica came in second.

To muddy the waters, Investopedia proclaims Costa Rica to be number one. The sheer size of the expat community of around 50,000 Americans adds credence to their claim. In contrast, Panama has only about half as many expats.

My belief, ultimately, it comes down to personal preference and what you want. An interesting thread on Quora reveals the many differing viewpoints of what's important to people.

For instance, the friendliness of the locals is the biggest factor for some. Whereas someone else might be more concerned about safety or living in a gated expat community. After spending some time there, you’ll define what’s right for you.

Let’s look at what each respective country offers.

On average, the cost of living can be 20% more in Costa Rica than Panama. This is largely due to import taxes in Costa Rica whereas goods delivered via the Panama Canal are tariff free. In addition, Panama has zero income tax.

Costa Rica is the most expensive Central American country to live in, which could make you wonder if it’s the best place to retire.

In fact, real estate values for a beachfront location, gated communities and luxury homes can be comparable to prices back home. However, monthly living expenses can be significantly less.

Right off the bat, healthcare costs are dramatically lower than the States. Secondly, shopping like a local will further stretch your dollar. Anything imported such as brand names or luxury goods are taxed, hence cost more.

One might say the canal provides Panama with an unfair advantage. All this translates into a more affordable lifestyle. The following chart breaks down an average retired couple’s monthly expenses. If one were to reside outside of the major cities, accommodation costs can decrease significantly. Furthermore, housing prices can increase during the dry season because of the greater demand due to tourism.

Panama offers a unique retiree discount plan free to male residents over the age of 60 (females 55). Their pensionado program, also referred to as Jubilado, includes many ways to reduce costs:

While not widely publicized, Costa Rica offers a senior discount plan to legal residents over the age of 65. This is called the Ciudano de Oro program and includes:

Is Costa Rica Safer Than Panama?

Overall, Costa Rica is safer than Panama. Theft and petty crime are rampant in both countries; however, Costa Rica has less violent crime and corruption.

Costa Rica is considered the most peaceful country in Central America and throughout the Caribbean. Panama lags slightly behind as the indicators below reveal:

The majority of crime occurs in the larger cities and tourist areas.

Putting everything in perspective, Panama is the second safest country in Central America.

There’s been numerous reports of law enforcement officers accepting money in lieu of issuing a ticket.

In comparison, their northern neighbor is in the 42nd position with corruption not as common. In light of these facts, Costa Rica is safer.

Healthcare: Which Is Better - Costa Rica or Panama?

The drawbacks of a universal healthcare system, often, are long wait times for non-urgent procedures and layers of bureaucracy.

For these reasons, the majority of expats and middle class (affluent) citizens opt for supplemental private insurance. This not only provides priority access, but more personalized care such as a private room.

The World Health Organization ranks Costa Rica 36th in the world, ahead of the United States, Cuba and New Zealand. Their universal healthcare system is referred to as CAJA (Caja Cosarricense de Seguro Social).

According to International Insurance, it provides access to around 30 CAJA hospitals and 250 clinics. The government continues to upgrade services and infrastructure as many rural facilities are in need of modernization.

The public system is funded by mandatory contributions from all residents and adjusted by income. Many expats choose to relocate here, in part, because of the affordable healthcare.

Costa Rica continues to invest in upgraded facilities and equipment. Dental tourism has become one of their specialties attracting clients from across the world.

The World Health Organization ranks Panama as 95th out of 191 countries.

The public healthcare sector is managed through the Social Security Fund (Caja de Seguro Social) which functions as both a healthcare provider and pension fund administrator. Funding comes from employee payroll deductions and employers.

The hospitals and specialists in Panama City are some of the best in the world.

Medical staff are, typically, fluent in English as many were trained and certified in the United States. Medical tourism is a growing industry and Panama ranks in the world’s top ten.

The downside, with the expertise and facilities clustered in major cities (Panama City and David), rural areas are under served. Many have only a clinic or doctor’s office and don’t even have ambulance service.

Thus, Costa Rica provides a better healthcare system due to superior coverage throughout the country. This wouldn’t be such a concern for someone retiring in or near a major center.

Who Has the Best Infrastructure?

We tend to take infrastructure for granted, at least until it’s lacking.

For instance, tap water is supposed to be safe to drink. Yet, in a 3rd world country that isn’t always the case. Power outages are another example of what should be an exceedingly rare event.

According to Trade.gov, the sad state of affairs is most of Costa Rica’s basic infrastructure needs major upgrades. Especially noted are ground transportation and water treatment plants.

One of the greatest challenges is the country’s worsening financial deficit. Projects have been put on hold as infrastructure continues to deteriorate. The roadways are but one example.

There’re more cars on the road than ever before. The main highways are congested with regular traffic delays and little has been done to address this.

Even maintenance is lacking. Secondary roads are narrow, many with deep potholes. Guard rails are almost non-existent and mountain / rural roads wash out frequently.

The laid-back approach to life disappears when you put a Costa Rican behind the wheel. They’re downright aggressive and reckless at times. All this contributes to serious traffic accidents and even loss of life.

The Panamanian government collected nearly $2.7 billion of canal toll revenue in 2020! Without a doubt, an envious position to be in.

With all the ongoing investments and infrastructure upgrades, Panama is continually modernizing and may be the best option.

Closing Thoughts on The Best Place to Retire

My wife and I have spent time in each country and fell in love with them.

Both are great choices filled with natural beauty, friendly people and either one could be the perfect retirement destination. Each has advantages and some things which could be improved upon.

If we were to choose, we’d lean toward Panama. The primary reasons being a lower cost of living and better infrastructure. As previously mentioned, everything comes down to personal preference and what’s important to you.

Pros and Cons of Retiring in Costa Rica

Pros and Cons of Retiring to Panama

Amazing Advantages of Retiring in Portugal